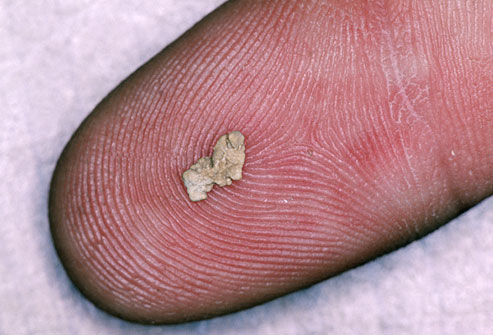 Kidney stones are solid or semi-solid mineral-like substances that developed from crystals that separate from the urine and build up on the inner surfaces of the kidney when chemical inhibitors contained in the urine are insufficient to prevent the crystals from forming. Kidney stones are considered one of the most painful disorders that occur in the urinary tract.

The primary modes of diagnosing kidney stones are through x-rays or sonograms that determine the size and location of the kidney stones. More advanced procedures include a Computed tomography scan or CT scan or intravenous pyelogram or IVP. Like x-rays and sonograms, these latter two methods can also determine the size and location of the kidney stone. The characteristic and classification of the stones may be determined through a laboratory examination of the stone itself. Before actually forming stones, blood and urine tests may be performed to detect the presence of any abnormal substance in the body that may lead to stone formation.

Extracorporeal shock wave lithotripsy (ESWL) is the most common of all the methods for treating kidney stones. It does not involve any operation. Instead, it uses shock waves created outside the body and travels through the skin and body tissues to hit the stones and break it in to crystals small enough to be passed in the urine.

The benefits of ESWL are that it may be done on an outpatient basis and the time for recovery is very short. Thus, normal activities of the person undergoing the treatment need not be disrupted for a very long time. However, several complications such as occurrence of blood in their urine for a few days after treatment, bruising and minor discomfort in the back or abdomen from the shock waves, and discomfort due to the passing of shattered stones in the urinary tract. ESWL are ideal only for relatively small stones.

The second form of treatment is the ureteroscopic stone removal which involves the passing of a flexible, narrow fiber optic instrument called a cystoscope through the urethra and bladder to reach a stone that is lodged in the ureter, especially in the mid- and lower-ureter. The stone is then removed using a device that resembles a cage or shattered into tiny pieces with a shock wave.

Percutaneous nephrolithotomy (PCNL) are usually done if the ESWL doesn’t work or a stone is particularly large. PCNL involves surgery under general anesthesia. The surgeon makes a small cut at the back to create a tunnel directly into the kidney and inserts a telescopic called nephroscope to locate the stone and remove it. When the stones are large, an energy probe such as ultrasonic or electrohydraulic energy probes may be used to break the stone into small pieces. Unlike in ESWL, the stone fragment are removed in PCNL by the surgeon instead of letting them pass naturally from the kidney.

Surgical treatment is considered the last resort. It is usually resorted to, among other reasons, when the stone does not pass after a reasonable period of time and causes constant pain, is too large to pass on its own or is caught in a difficult place, damages kidney tissue or causes constant bleeding and has grown larger. Surgery requires a long recovery time of about 4 to 6 weeks.